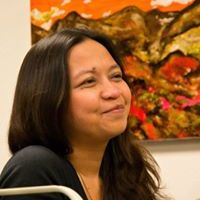 Astri Parawita Ayu was born on 22 April 1978 in Jakarta, Indonesia. She finished her medical training at School of Medicine Atma Jaya Catholic University of Indonesia in 2003. She continued to the psychiatric training at Department of Psychiatry University of Indonesia/Cipto Mangunkusumo hospital in 2004. Shortly after obtaining her specialty in psychiatry, she returned to Atma Jaya Catholic University of Indonesia as an academic staff in 2008. At that time, she started to focus more on addiction medicine/addiction psychiatry in her academic and clinical work. In 2009 she received a grant from the Indonesian National AIDS commission to follow the Training on Management of the AIDS Response at the Royal Tropical Institute in Amsterdam, the Netherlands. In 2010, she received the WHO/ISAM travel award to present her work at the International Society of Addiction Medicine (ISAM) meeting in Milan, Italy. Since then she has regularly presented her works at the ISAM meeting: Geneve, Switzerland (2012); Kuala Lumpur, Malaysia (2013); Dundee, Scotland (2015); and Motreal, Canada (2016). She also presented her works at other meetings, such as the Global Addiction Conference (Lisbon, Portugal in 2011 and Rio De Janeiro, Brazil in 2014). Additionally, she has been teaching addiction medicine and psychiatry at the university since 2009. She also worked as a psychiatrist at a community-based addiction treatment clinic. This clinic is part of the university project to reduce the harmful consequences of substance use, especially HIV/AIDS infection. In 2014 she received a grant from the Indonesian Directorate General of Resources for Research, Technology and Higher Education, Ministry of Research, Technology, and Higher Education of the Republic of Indonesia, for a PhD study at Radboud University, the Netherlands. Her PhD project has focus on the addiction medicine training in medical education. The project and its results are described in this thesis. After finishing her PhD, she has returned to Indonesia and continues working at Atma Jaya Catholic University of Indonesia. With other psychiatrists of the school of medicine, she initiated the Addiction Medicine study group. Currently, she is responsible for the evaluation of the addiction medicine block curriculum. She has also joined a project at the HIV/AIDS research center of the university. She is the study coordinator for the HIV Early Testing and Treatment project, a project funded by the World Health Organization, the Indonesian Ministry of Health, and Kirby Institute UNSW, Australia.

Addiction Medicine Training in Medical Education: The Importance of the Attitude towards Patients with Addiction and Perceptions of Addiction

See full list
We use cookies on our website to give you the most relevant experience by remembering your preferences and repeat visits. By clicking “Accept All”, you consent to the use of ALL the cookies. However, you may visit "Cookie Settings" to provide a controlled consent.
Cookie Settings Accept All
Manage consent