Hitting the High Notes: The Story of Jazz and Narcotics 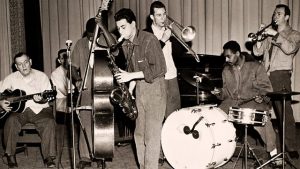 In 1929 in Lexington, Kentucky, the US Government began building the first ever drug treatment facility with what was at the time a radical new ethos – that people with drug problems should receive therapeutic care, not be incarcerated as a punishment. The Narcotic Farm was born, and embraced as a new model of a more humane approach to the rising problem of drug addiction.

What no one predicted was that the Narcotic Farm would also develop into an informal musical conservatoire. Heroin was very much part of the jazz subculture, and the Narcotic Farm numbered many famous musicians amongst its patients, including Sonny Rollins, Chet Baker and Lee Morgan, who were encouraged to write, practice and perform as part of their treatment.

The Society for the Study of Addiction sponsored Narco Farm in November 2018 at Science Gallery London. This event was curated and chaired by Dr Sally Marlow, and open to anyone with an interest in addiction and music, attracting scientists, activists, clinicians, historians, experts by experience, and the general public.  It was an afternoon of talks and discussions, followed by an evening of live music and film.

The story of the Narcotic Farm and the musicians who played in it is fascinating and unique. Dr Sally Marlow was inspired by the film The Narcotic Farm, directed by JP Olsen and Luke Walden, which is available here.

She then travelled to the USA to uncover more of the story of those musicians for BBC Radio 3, resulting in a documentary called Hitting the High Notes.

She also wrote about it the legacy of the Narcotic Farm for addiction research and treatment in an article for The Lancet.

There are other resources available which tell the story of the Narcotic Farm. Marjorie Senechal, daughter of Abe Wikler, Associate Director at the Narcotic Farm, wrote a memoir of her time there.

There have also been studies over the years which have looked at the relationship between addiction and jazz, including one in 1959 by Charles Winick, and more recently by Wills and Tolson

The relationship between jazz and heroin was also documented in Playboy in 1960, which is available to read in the transcript , and the famous jazz magazine Downbeat devoted a whole issue to this subject in February 1961